Skip to content
Cart
FREE SPRING SHIPPING On all orders.
Divios™ CBD Guide
Everything you need and may want to know about CBD:

Unlike THC, Cannibidiol (CBD) does not have intoxicating effects, which is one of the primary reasons it has become so popular — it’s healthy without the high.

Cannabinoids, starting with THC and then later CBD, were first unearthed by the Israeli organic chemist, Raphael Mechoulam in 1964. Since then, scientists continue to learn more about the cannabis plant and these important compounds through their research and pre-clinical trials. If you really want to learn about the the origins of cannabis research, we encourage you to watch ‘The Scientist’ -- it's an excellent documentary on the subject. 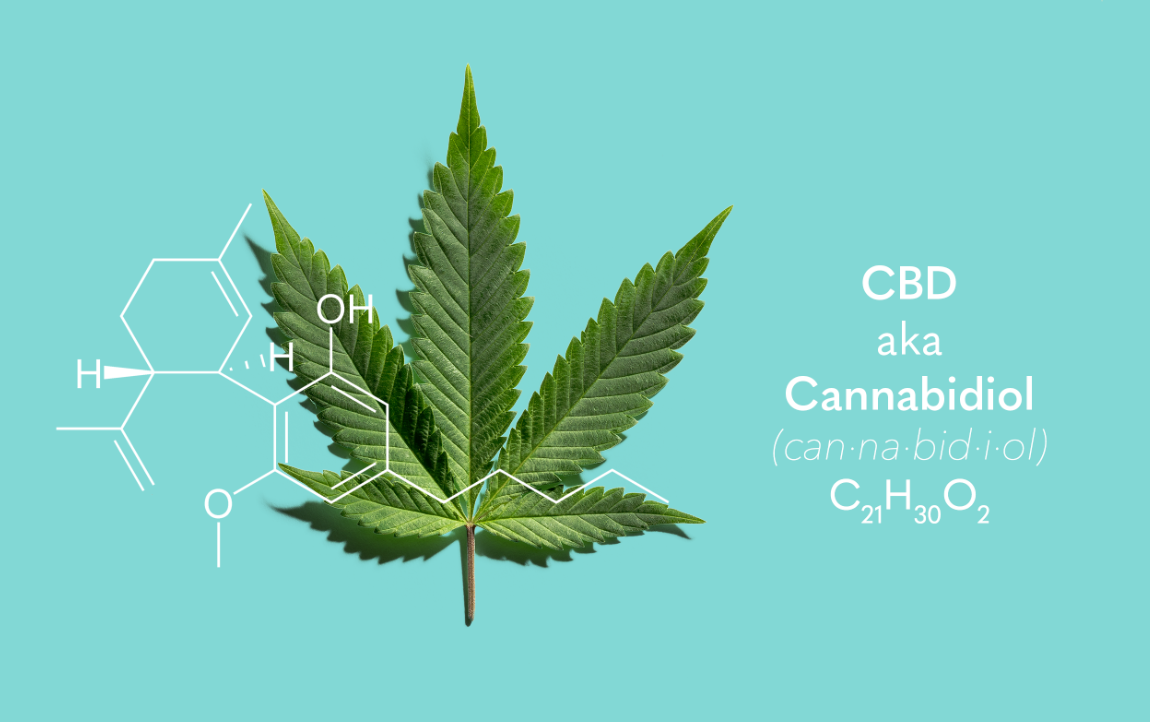 Since its discovery, dozens of studies have found evidence that CBD can be therapeutic for many conditions (mental and physical) including the following:
Most notably, CBD has been used to assist with epilepsy, especially in young children thanks to its efficacy, safety and accessibility, which is where you may have heard the names Charlotte’s Web and/or Haleigh’s Hope. Furthermore in April 2018, FDA advisers voted to recommend approval of the first prescription cannabidiol medicine — to treat rare and severe forms of epilepsy, known as Epidiolex.
Thanks to pre-clinical research and the dedication of various academic research centers, we now know the vast potential of CBD and its power to heal, but we are still learning more every day. 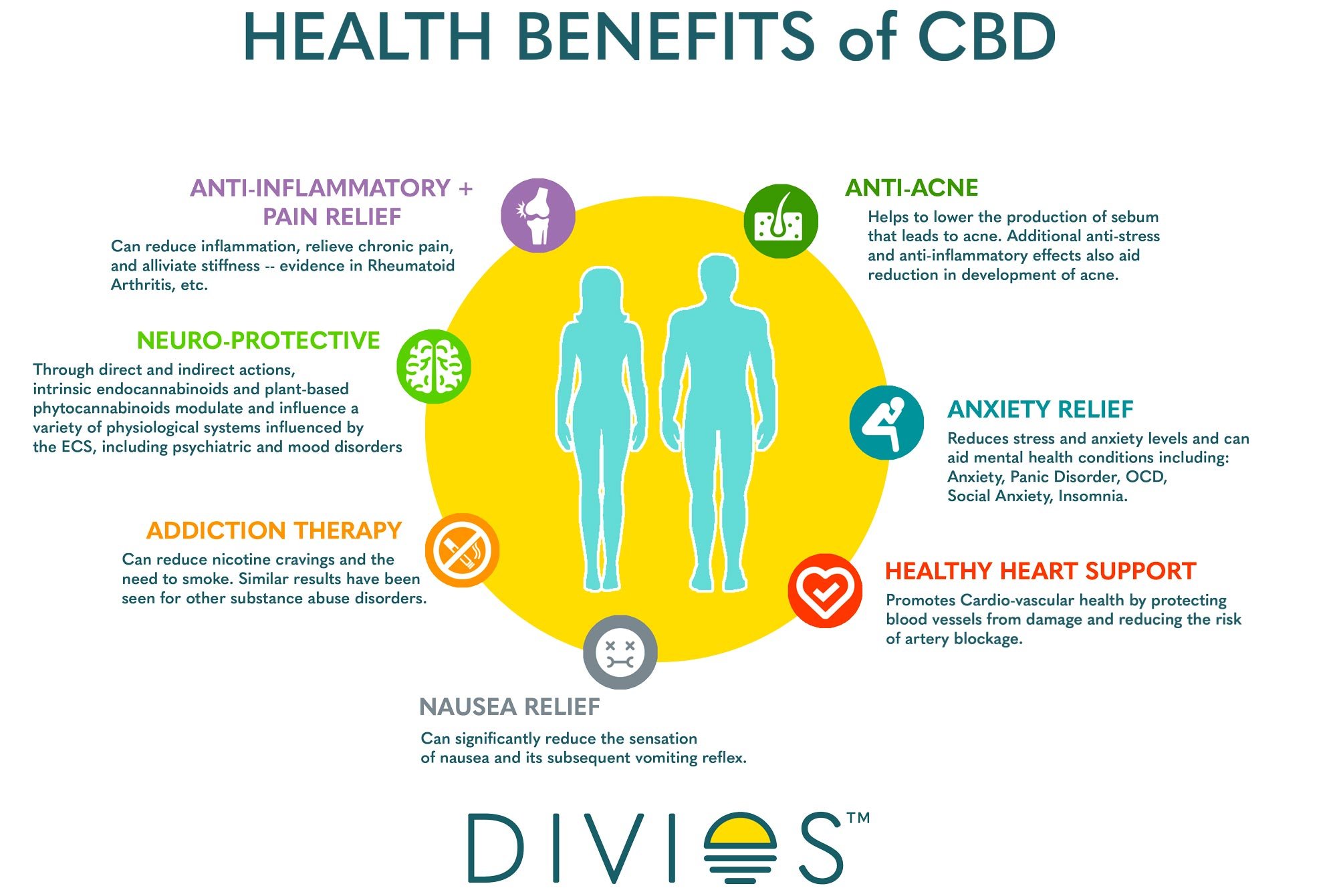 “[With CBD] many any adults are finding relief of pain, better mobility due to less inflammation, and less anxiety and depression."
-- Dr. Bonni Goldstein. former Chief Resident at Children’s Hospital of Los Angeles and current Director of Canna Centers.

Furthermore, unlike traditional Rx drugs prescribed to patients as well as to individuals suffering from chronic pain and depression, CBD does not produce any serious side effects. As a result, CBD is helping open new possibilities and a shift in perspective on plant-based medicine and treatment options, including opioid-use reduction.
It’s important to note there are different types of CBD oil, which can affect its legality and intended usage. Hemp-based CBD is derived from hemp plants, which are classified as cannabis plants but are grown for their fibers — not their flowers (“buds”) like marijuana plants. Hemp-based CBD comes from plants that contain less than 0.3 percent THC. Subsequently, industrial hemp has fostered a way for CBD products to be sold across state lines. 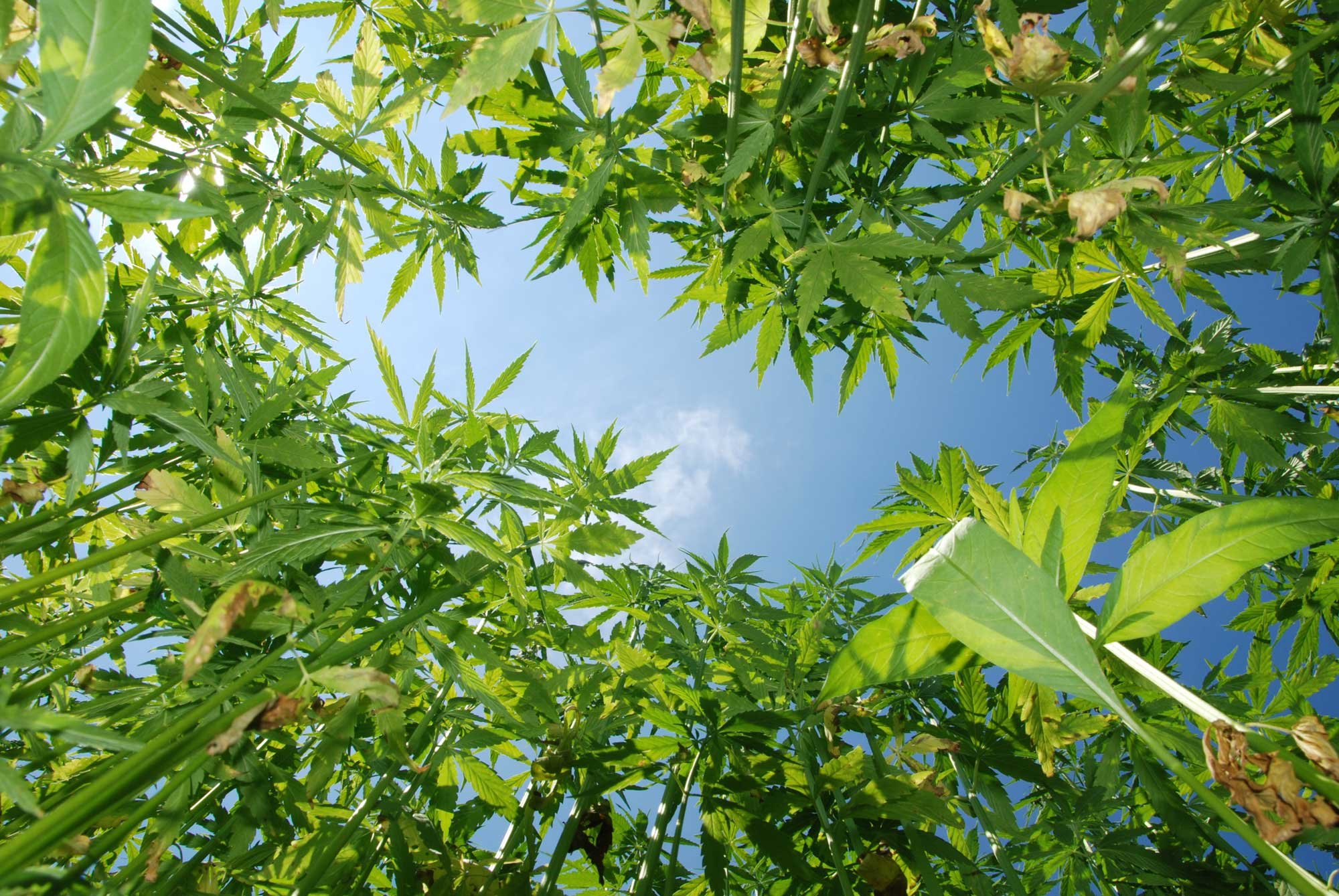 Finding products and brands that use both legal and quality CBD is crucial for customers seeking to maximize the benefits of cannabis.
As reputable cannabis resources such as Hail Mary Jane note, “check to make sure the company has a listed medical advisor, and don’t be afraid to ask for test results that show the cannabinoid content before purchasing a CBD product.” A recent study by Penn State University determined that up to 70 percent of online CBD products are inaccurately labeled.
At Divios, we are transparent about our processes, ingredients and their effects. At Divios, our hemp-based CBD products are infused with only pure CBD isolate, which is an extraction that separates CBD from all other cannabis constituents, and we work with expert PhD formulation chemists to crafted topicals that are safe, reliable and effective.
INDEX:

How does CBD work?
Simply put, Cannabidiol (CBD) can produce a wide range of health benefits for the human body and mind — but just how is this possible?
The answer is the endocannabinoid system.

Discovered in the 1990s, the endogenous cannabinoid system (endocannabinoid system or ECS) is essentially a bridge between our body and our mind. Our ECS consists of numerous cannabinoid receptors that are integral to the human brain and play a pivotal role in physiological processes. Our two main ECS receptors, CB1 and CB2 exist within our brain, nervous system, as well as many other peripheral organs and tissues.

The prevalence of the ECS explains why CBD and other cannabinoids have such an impact on so many different parts of our bodies. 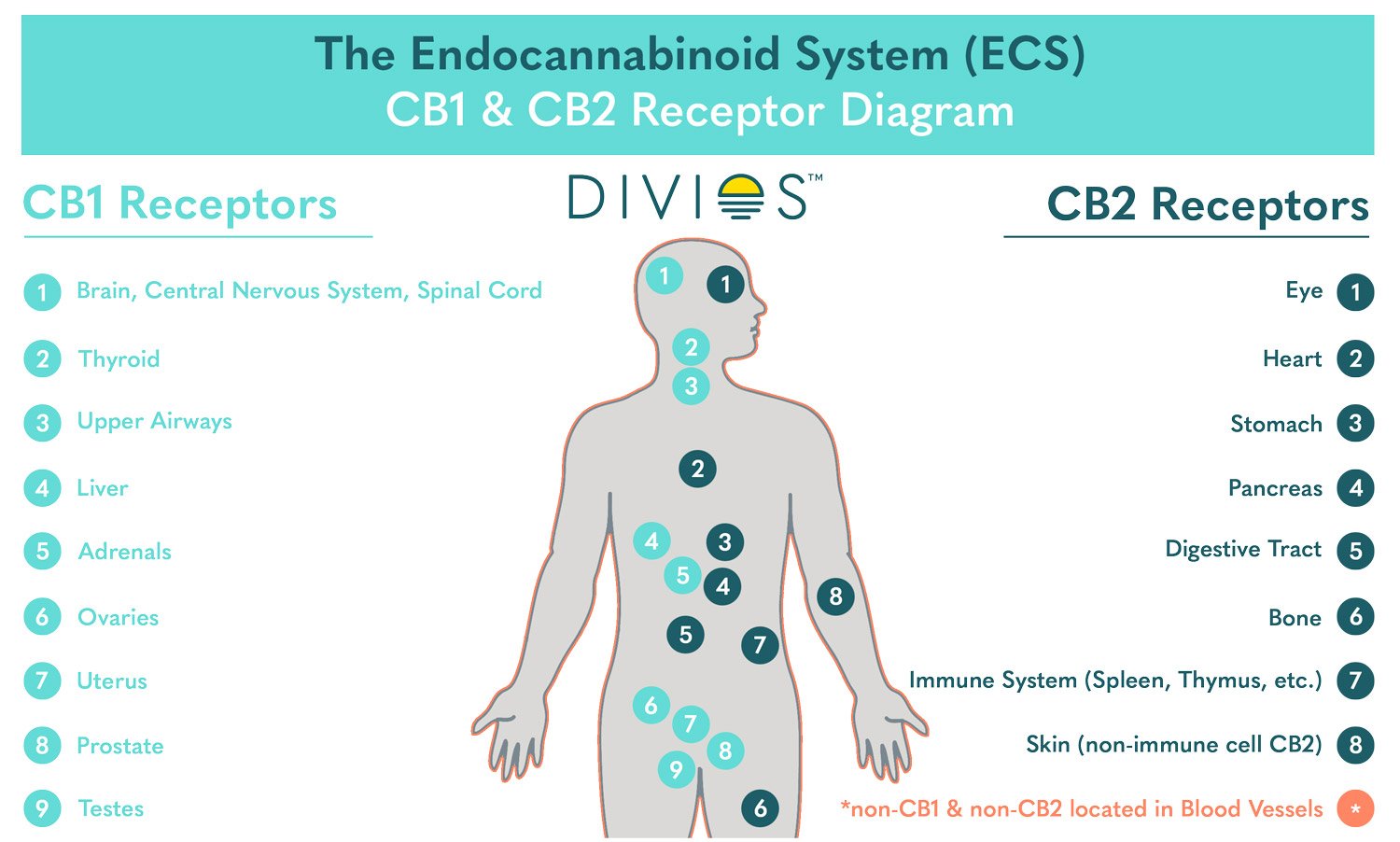 Many physiologists regard the ECS as one of the most important physiologic systems involved in establishing and maintaining human health. Our bodies naturally produce their own cannabinoids and these compounds play an important part in regulating sleep, appetite, memory, mood and pain sensation.
When balanced, your endocannabinoid system helps keep your body and mind in optimal health. However, stress and illness as well as other factors can deplete your natural supply.
Therefore, supplying and nourishing your endocannabinoid system can be extremely beneficial for energy levels, cell growth, physical pain, stress, and other health conditions.

As the Director of the National Institute on Drug Abuse (National Institutes of Health), Dr. Nora D. Volkow explains, “Cannabinoids have their effect mainly by interacting with specific receptors on cells in the brain and body: the CB1 receptor, found on neurons and glial cells in various parts of the brain, and the CB2 receptor, found mainly in the body’s immune system.”

This is why the endocannabinoid system is so integral to the nervous and immune systems.
Unlike THC, which actually binds to the CB1 and CB2 receptors in order to mediate pain, psychoactivity, inflammation, etc. CBD works indirectly with these two receptors and other cannabinoid receptors by inhibiting production of certain enzymes. In some cases, these enzymes that CBD blocks like FAAH, actually activate the CB1 receptor, which is why CBD can reduce the side effects of THC like anxiety. On the other hand for instance, CBD reduces an enzyme that actually breaks down another important endocannabinoid called anandamide, thus allowing that therapeutic neurotransmitter to flourish.

Furthmore, CBD interacts - either directly or indirectly - with several other receptor systems in the brain, including opioid, dopamine and serotonin ones, which can affect pain, addiction and mood. Subsequently, its therapeutic possibilities are very extensive.
INDEX:

Ways to take CBD
People continue to explore new uses for CBD and how to administer its qualities. For instance, Divios is the world’s first all-natural cannabis sunscreen.
In general, CBD comes in a variety of forms — oils, edibles, sublingual sprays, vapor oils, and our favorite -- topicals. Visit our ‘cannabis topicals’ guide to learn more about their uses and effects.
Ultimately, you should choose the method that suites you best. What’s most important is to use quality CBD and to do so in a way that makes you comfortable and achieves your physical and mental goals.

Ingesting CBD (oral, inhalation) is the most common way to experience its full range of benefits. Here are some helpful notes on ingestion usage methods:
More and more though, people are discovering the advantages of using CBD externally (as in the form of TOPICALS because it’s an excellent way to target specific areas and receive its benefits for the purposes of inflammation, pain relief and cellular care. 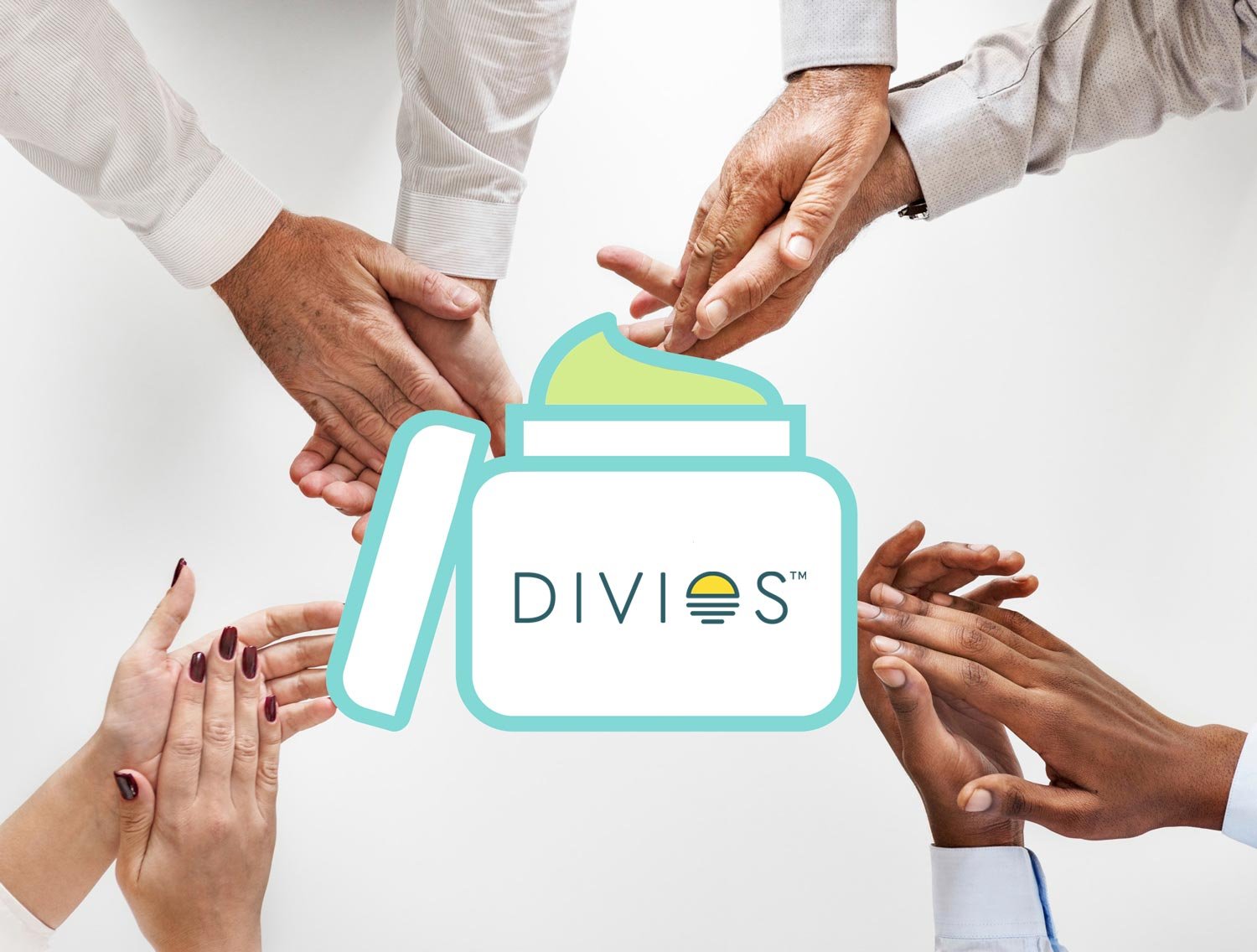 To learn more about Cannabis Topicals and how CBD can help your skin, visit our guide here.
INDEX:

How much CBD?
The short answer is that CBD is a safe, plant-based supplement and that there is no standard dosage when it comes to treatment at this time.
If you plan to inhale or ingest CBD, we recommend you start in low, controlled doses and monitor the effects on your body. Everyone is different.
If you don’t get the results you desired, then steadily increase the dose. 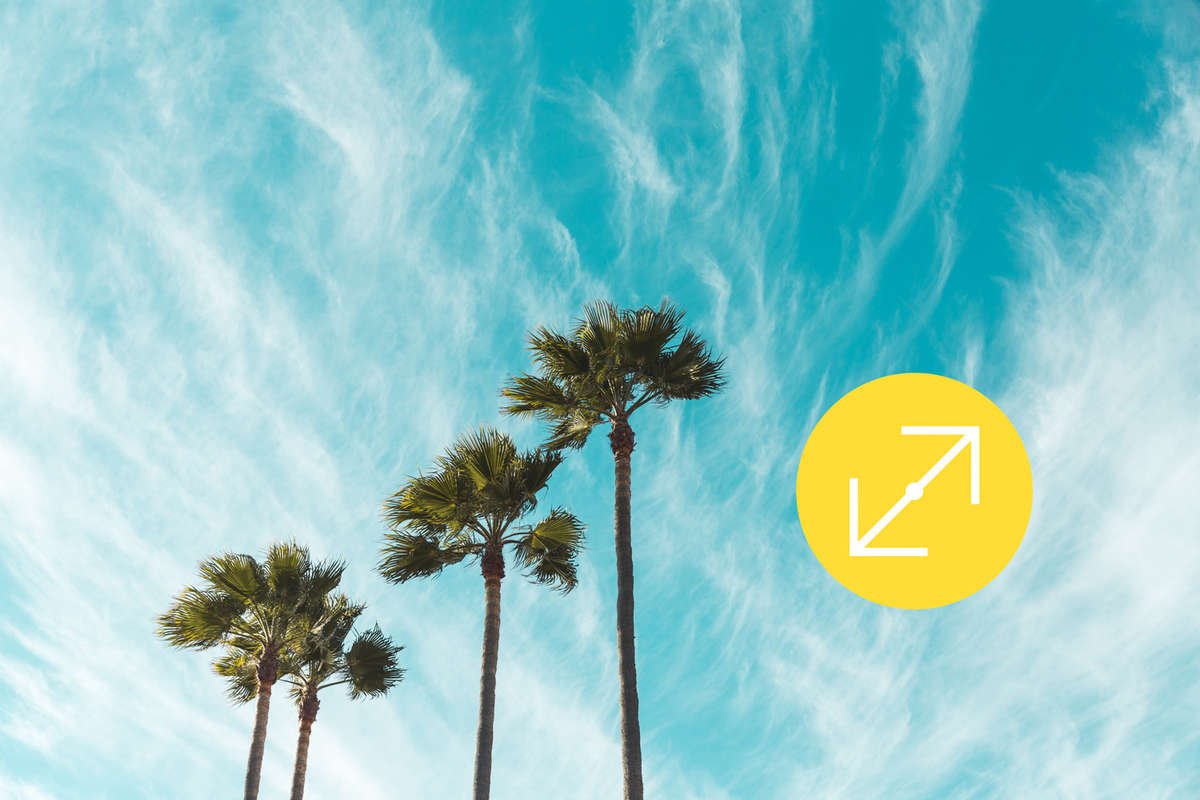 As for a more detailed answer, studies suggest that “CBD is non-toxic in non-transformed cells and does not induce changes on food intake, does not induce catalepsy, does not affect physiological parameters (heart rate, blood pressure and body temperature), does not affect gastrointestinal transit and does not alter psychomotor or psychological functions. Also, chronic use and high doses up to 1,500 mg/day of CBD are reportedly well tolerated in humans.”
As far as topicals are concerned, many companies market their CBD products as effective but their CBD concentrations are not sufficient in order to properly treat inflammation and/or pain relief. 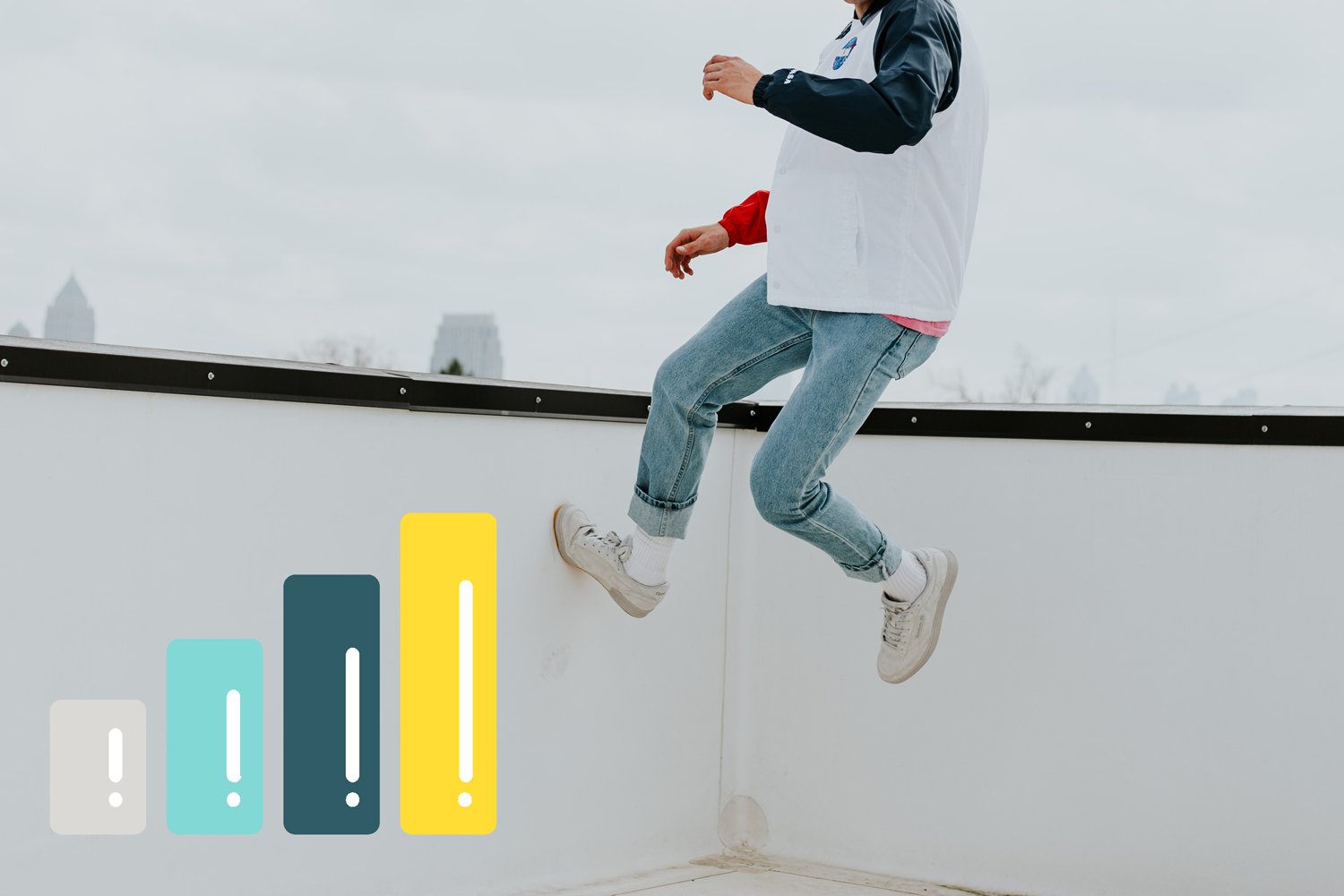 Divios products are carefully crafted in order to be safe and effective, and we take the science and therapeutic aspects of cannabinoids very seriously. Our expert formulation PhD chemists have extensive backgrounds within the cannabis sector and have been very successful at developing healthy, therapeutic natural care solutions for both recreational and medical purposes.
INDEX:

Is CBD legal?
Hemp-Based CBD, meaning that it has been derived from the industrial version of the cannabis plant, hemp and contains less than 0.3% THC — is legal in all of the United States.
Thanks to the 2018 Farm Bill, the transfer of hemp-derived products across state lines for commercial or other purposes is now legal. This important bill also lifts restrictions on the sale, transport, or possession of hemp-derived products, so long as those items are produced in a manner consistent with the law. 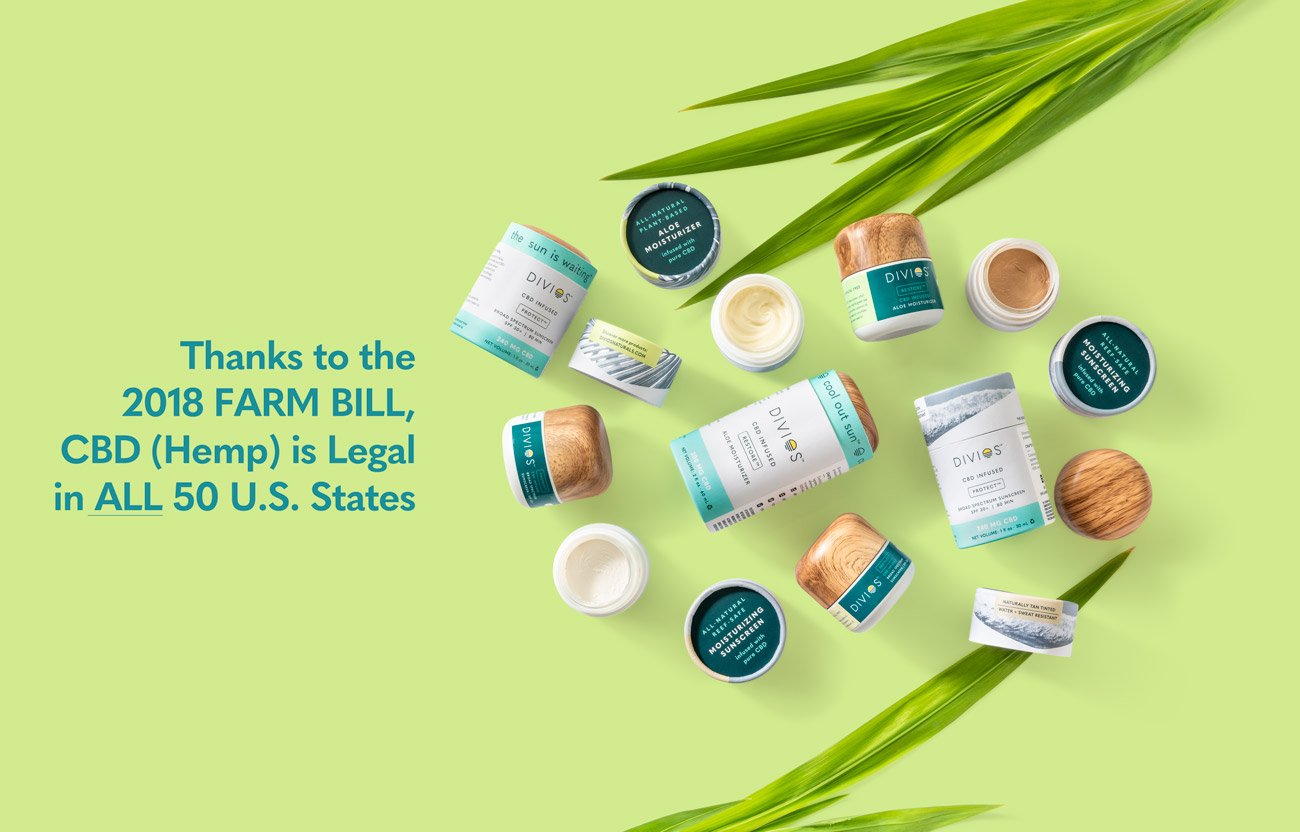 If you live in California, you can visit your local cannabis dispensary / retail store to request our Divios Plus™ (THC) line of products.
INDEX:

Hemp vs Marijuana
For all its good, the cannabis plant sure has caused a lot of confusion. Unfortunately, like so many things that scare us, that’s usually because we simply don’t understand the thing, and thus we fear what we don’t know.
So let’s clear things up!
As outlined by the International Association of Plant Taxonomy, “both hemp varieties and marijuana varieties are of the same genus, Cannabis, and the same species, Cannabis Sativa.” Both versions have been cultivated throughout human history as a source of fiber, oil and food, and for its medicinal and intoxicating properties. 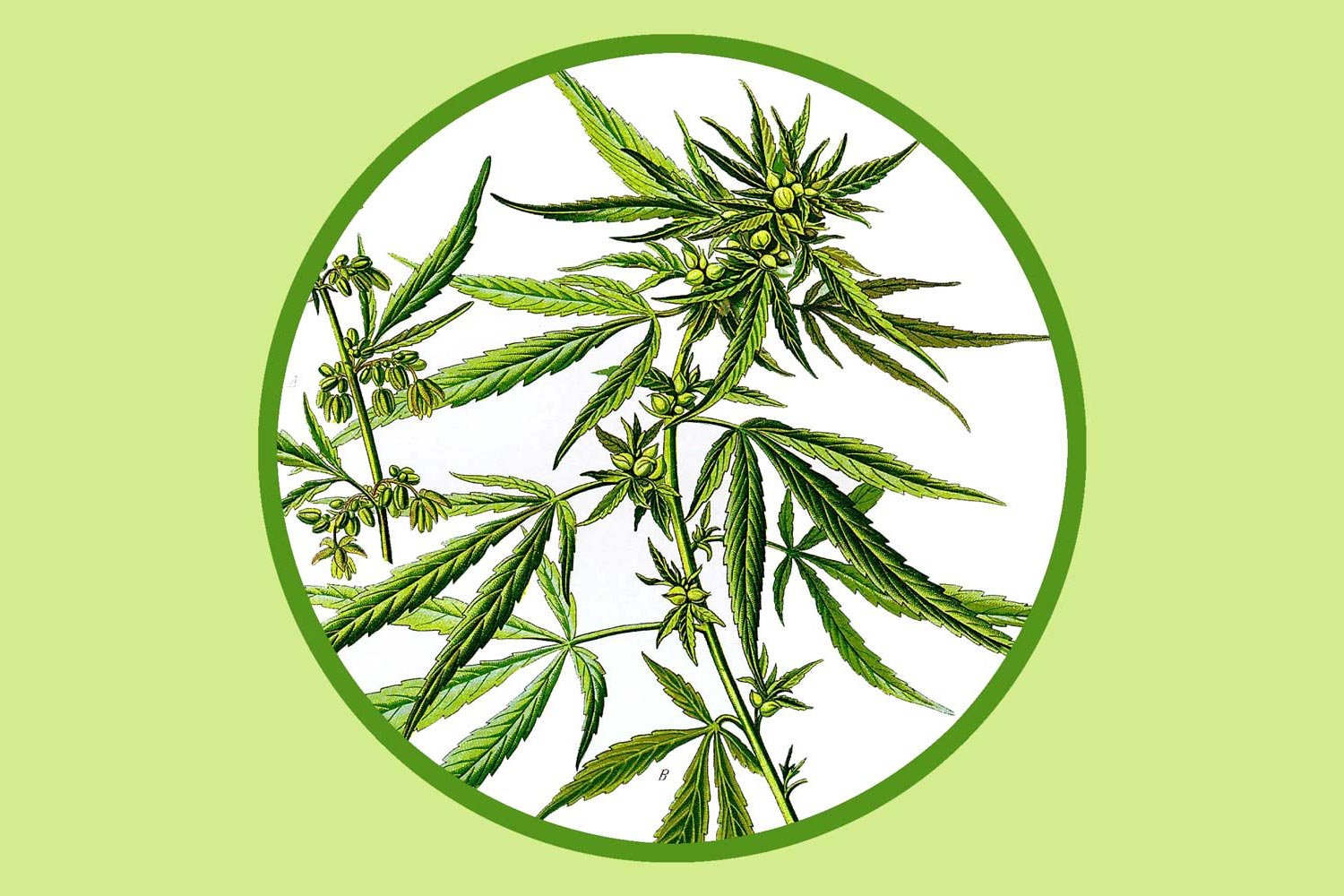 What primarily distinguishes hemp and marijuana is their breeding and cultivating and therefor how they are utilized.
Cannabis (marijuana) is bred for its potent, resinous glands — known as trichomes, which receives their definition from the Greek word “Tríchōma” meaning “growth of hair.” In cannabis, they actually function as a defense mechanism, protecting flower from insects, frost, wind and heat.
In marijuana, trichomes contain high levels of tetrahydrocannabinol (THC). These cannabis (marijuana) strains typically produce anywhere from 5-20% THC on average, but newer, more advanced medical and prize strains exhibit as high as 30% THC. 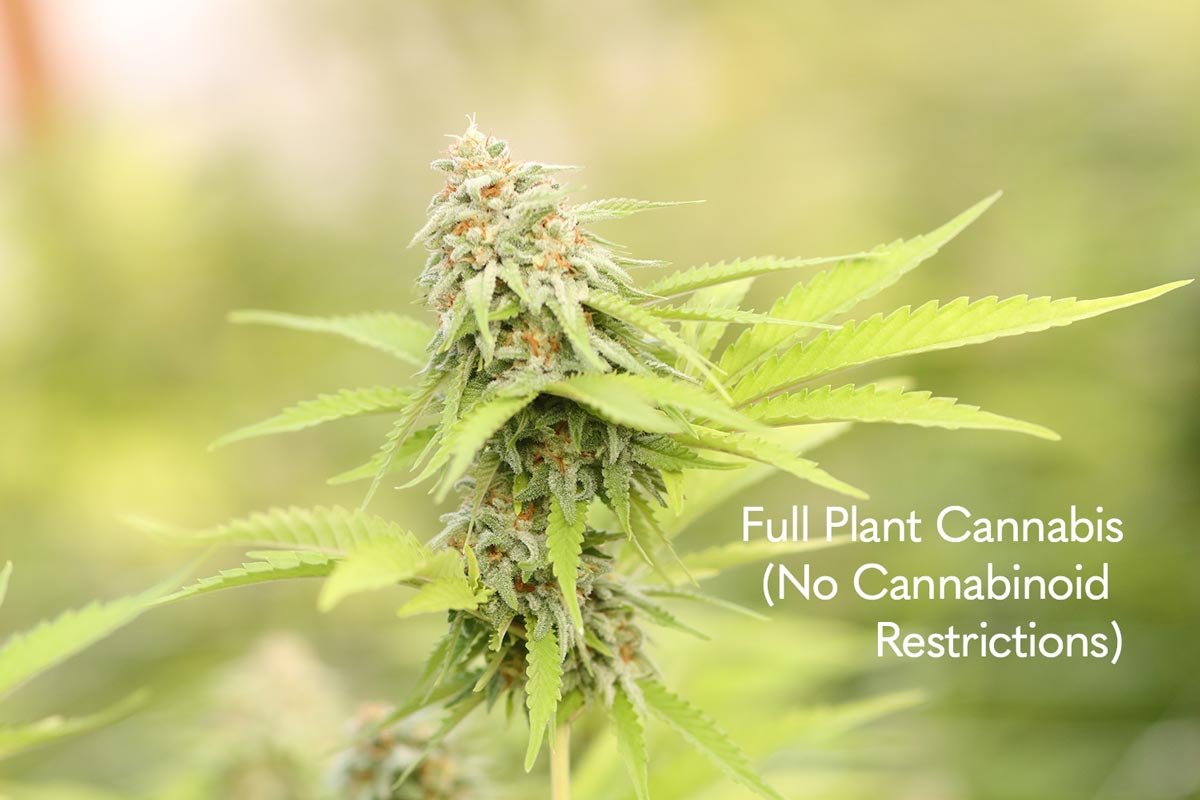 On the other hand, cannabis (hemp) contains negligible amounts of THC — by legal standards this means under 0.3%. However, hemp plants are an excellent source for producing CBD.
While marijuana typically requires more attentive and specific grow conditions, hemp is usually grown outdoors and less care is needed for individual plants. Hemp can grow up to four meters tall, its stalks are skinnier looking and its leaves are also thinner and less densely clustered than leaves on a marijuana plant. 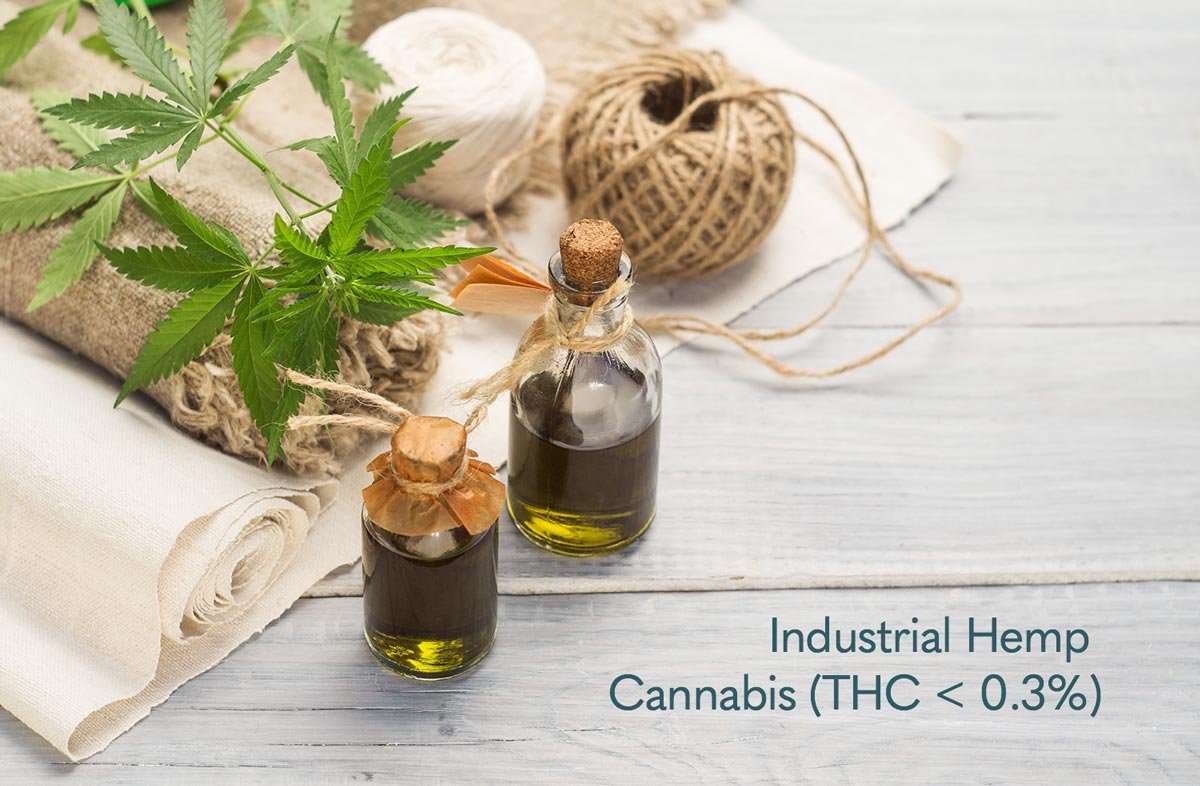 From a usage standpoint, hemp was selectively cultivated moreso for industrial and commercial purposes as the fibers from its stalk can be used for robe, textiles, paper, plastic and oil based products. Due to its high levels of THC, marijuana has in long-standing been used for its medicinal properties and recreational offerings.
Legally, cannabis (hemp) is much more accepted than marijuana — worldwide. Nonetheless, despite being a staple crop of the the United States (passed on from the Native Americans), the US government began to criminalize all cannabis in the 20th century. Thankfully, laws and political views are changing and cannabis — both hemp and marijuana — are becoming more accepted again; state by state.
INDEX:

Experience the best in sun and skincare with our starter pack, which includes a Protect (Sheer or Tan) and a Restore - along with a free Divios giveaway. Surprise, surprise.